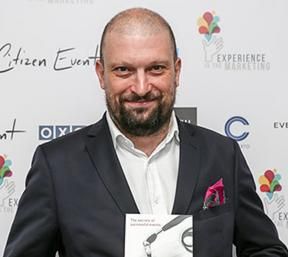 Simon is a serial entrepreneur in the event industry, having successful launched and sold events in the worlds of media, events, green energy and charity, He is a widely recognised as a champion for the power of face-to-face marketing, social media and story-telling through events.

His work in the event industry includes trade shows, awards, conferences and networking events as well as a best-selling book – The Event Professionals Handbook.

He has written and presented on hundreds of occasions about “unlocking the event horizon”. Using the power of awards to tell stories that connect, build and inspire communities in virtual, hybrid and physical spaces.